More About Our Attractions 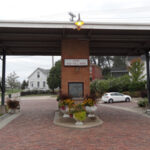 With the completion of the new bridge, the Keokuk side of the old bridge was transformed into an Observation Deck.  The deck provides a wonderful view of the Mississippi River, the Illinois riverfront, Lock & Dam #19, the George M. Verity Museum and Victory Park. 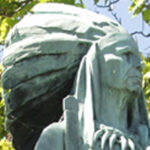 Rand Park
(Rand Park Terrace & Grand Avenue Entrance)
This statue of Chief Kiyo’ kaga, (one who moves about alert) 1788-1848, later known as Chief Keokuck, or Chief Keokuk stands in Rand Park, the front yard of the city named after him. Chief Keokuk was a controversial figure whose charismatic manner of speech and oratory swayed the opinions and affected the lives of many.  In his honor, citizens of this city erected the nation’s first statue dedicated to a Native American.  Descendants of Keokuk continue to visit the statue dedicated to him, most recently during the country’s Bicentennial Year of 1976, and again in 2013, marking the occasion of the statue’s 100th year since its dedication.

428 Main Street
The Keokuk-Hamilton Dam Museum holds collections of artifacts, photographs, documents, and books that trace the history of the hydroelectric powerhouse and dam. These collections have been generously donated by individuals and Ameren-Missouri. As of August 13, 2021, the Museum is closed due to unforeseen circumstances.  It will re-open at a later date. 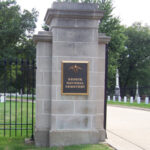 Intersection of S. 18th Street and Carroll Street
The Keokuk National Cemetery is one of twelve original national cemeteries designated by the U.S. Congress.  It is currently the final resting place for the remains of over 4,000 American soldiers. In 1997 the Cemetery was added to the National Register of Historic Places.

During the Civil War, the presence of the College of Physicians and Surgeons caused the federal government to locate a military hospital in Estes House (formerly at 500 Main Street), and four other sites in Keokuk. The sick and wounded were transported to Keokuk hospitals by riverboats on the Mississippi River.  Many soldiers, from the North and South, died and were buried in what became Iowa’s only National Cemetery. 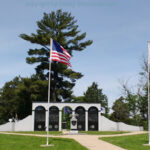 Intersection of S. 18th Street and Carroll Street
The Veterans’ Memorial dedicated on July 4, 2005 is a tribute to the men and women who served with honor in the United States Armed Forces. This beautiful monument sets at the entrance of Oakland Cemetery, 18th and Carroll Streets in Keokuk. 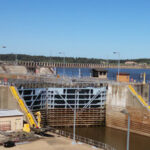 200 S. Water Street
The Keokuk Union Depot was designed in 1891 by the Chicago architectural firm, Burnham and Root to serve the five railroads that converged in Keokuk.  The Depot is listed on the National Register of Historic Places.  Distinctive architectural features include the vaulted oak paneled waiting room, the hexagonal ticket booth, the platform umbrella and the Romanesque Revival brick arches.  The City of Keokuk acquired the building in 2011 and established the Keokuk Union Depot Commission, which has begun an extensive preservation project on the building’s exterior and interior. 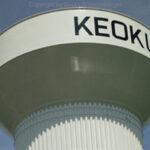 1402 S. 7th Street
Keokuk is home to the second largest water tower in the United States.  It holds 4 million gallons of water and stands over 150 feet tall. The water tower is important for its industrial customers, aids the city in fire protection and is beneficial during power outages and disasters. The tower was installed 2011 at a cost of $7.2 million dollars.

523 N. Water St.
Construction on U.S. Lock and Dam #19 began in 1910, and when completed in 1913, it was the largest electricity generating plant in the world. Photographer Herman Anschutz captured this historic endeavor on film. His photos are on exhibit at 428 Main St., Keokuk.  The locks are 1200 feet long and 110 feet wide, with a lift of over 38 feet and large enough to handle a full-length fleet of barges. Major commodities moved include grain, aggregate, petroleum, coal and chemicals. The present lock was put into operation in 1957 at a cost of $13.5 million dollars. It is owned and operated by the U.S. Army Corps of Engineers. The Power House and spillways (shown above) are owned and operated by AmerenUE, a privately owned utility company. 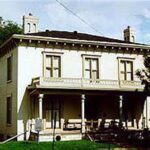 318 N. 5th St.
Samuel F. Miller House and Museum is owned and operated by the Lee County Historical Society. The home was built by Samuel Freeman Miller in 1859 at a cost of $13,000.  Miller was appointed to the United States Supreme Court by Abraham Lincoln in 1862, and served until his death in 1890.  Due to COVID-19, the Miller House has suspended all programs, tours, and activities until further notice. Visit www.lcihs.org for updated information. 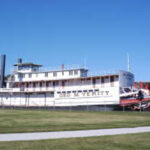 200 Mississippi Drive
The George M. Verity River Museum is located in Victory Park on the riverfront. The paddle boat was built in Dubuque, Iowa by the U.S. Government in 1927 to revive river transportation and move barges from St Louis to St. Paul. It was then known as the S.S. Thorpe. Armco Steel Corporation bought the boat in 1940 and put it into service on the Ohio River, renaming it after the founder of their company, George M. Verity. The George M. Verity was donated to the City of Keokuk in 1961 after being retired from service. 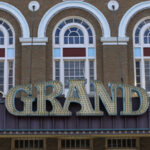 26 N. 6th St.
The Grand Theatre was designed by Merle F. Baker and was constructed on the foundation of the Keokuk Opera House (Circa 1880) which burned in 1923. It was patterned after theaters in Chicago and was praised as one of the finest theaters in the country at the time.  Presently, The Grand Theatre is owned by the city of Keokuk and is used as a performing arts center.  It is independently operated by the Grand Theatre Commission and used by various organizations.